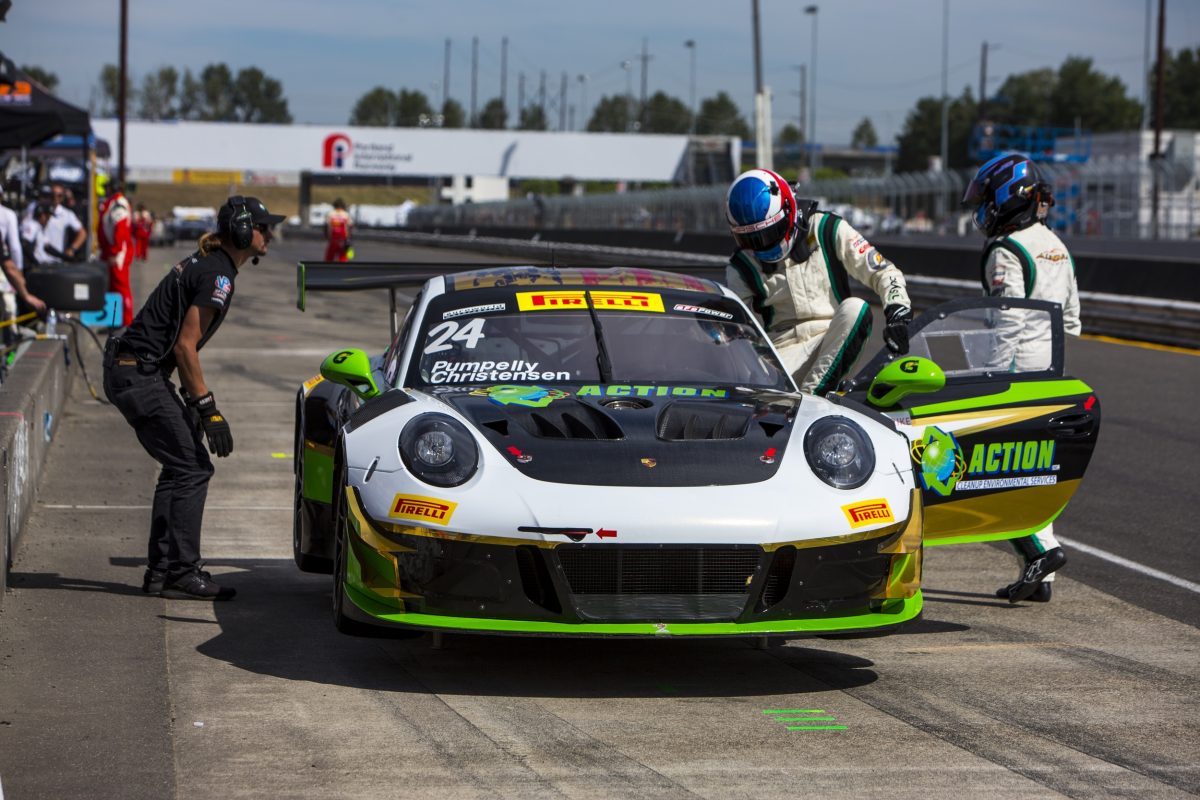 Hot and sweaty in Portland

The 58th running of the Rose Rose Cup Races at Portland International Raceway was a hot and sticky affair. With temperatures pushing 100 degrees Fahrenheit, it was one of the hottest weekends of the year! This race weekend the fellas from Alegra Motorsports added to the heat with brand new sponsor onboard, Action Cleanup Environmental Services.

Fresh from kicking ass and taking names at Road America (read all about that here), Michael Christensen was back in the driver’s seat, this time with his co-driver Spencer Pumpelly. The dynamic duo wasted no time lighting up the track finishing the first free practice with the fastest lap times and P4 in the second free practice. Things were looking good for a weekend of racing.

Saturday morning Michael put No. 24 Lady Luck through her paces and set the track on fire 🔥🔥🔥(which likely resulted in some of the additional heat in the area) setting a lap time of 1.10.177 – our first pole position of the season. With that behind us, the crew set to work to get the No. 24 car prepped for race one later that afternoon.

Big shout out to our sponsor @actioncleanup this weekend! That bright green looks awesome on Lady Luck! #thankyou #motorsport #beautiful😍

At 2:10 PST, the height of the heat, the green flag dropped that Michael lead the charge down the front straight into turn one. Tony Vilander, in the No. 61 Ferrari made a run on the inside looking to catch Michel off-guard however appeared to get caught up with the No. 2 AMG of Daniel Morad (although we’re not entirely sure if that is how it happened). The result was a nice gap pulled by Michael. For the first 20 mins of the race, we kept pace.

Unfortunately, the headwinds of racing struck as we pitted for the mandatory pit stop. While the pitstop was fast, the Ferrari managed to stay out one extra lap which allowed them to pull in to P1. As we exited we came hot on the tail of the Ferrari, and while Spencer Pumpelly made a valiant effort to find P1 again, that Ferrari just had a little edge (its always been a tough competitor), and with few opportunities to pass we found ourselves in the prancing pony’s mirrors for the rest of the race.

It was a grind out there – managed to come away with a P2 finish. Looking for that top step tomorrow. #Alegra💪 #keepgrinding #motorsport #porsche

After 50 minutes we would cross the finish line in P2. Respectable yes. Disappointing? A little.