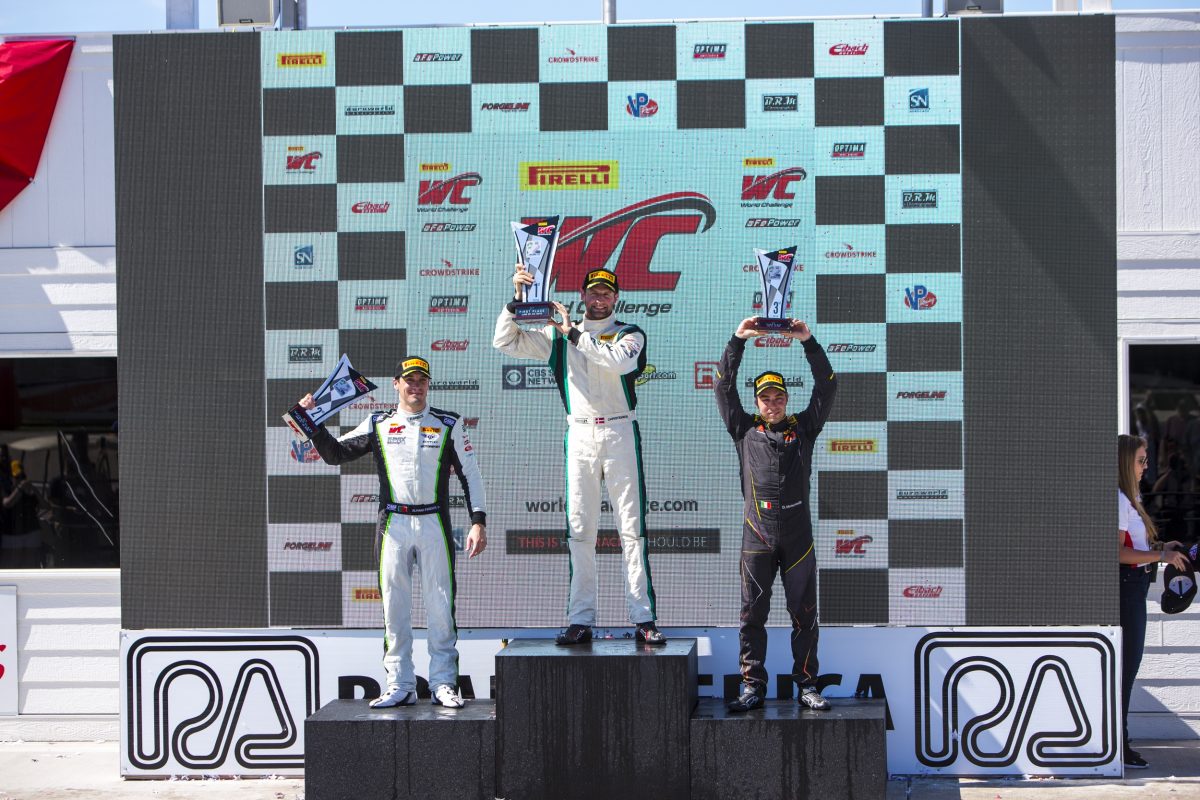 It’s been a pretty decent month for our Porsche Works Driver Michael Christensen and we’re happy to be along for the ride. While our start to the Pirelli World Challenge 2018 was a little rocky, we think it’s safe to say that we’ve not only turned that corner, but we’re accelerating full throttle down the back straight. You could say that the ESPN turning point came around our Canadian Tire Motorsport Park/Lime Rock Park back-to-back weekends.

North of The Border

We travelled north of the board to take on the field at Canadian Tire Motorsports Park which was shrouded in mist and torrential rain — better than snow and ice that you might otherwise find out here. The fog was so thick we couldn’t see the marshals (it didn’t help that they were wearing white). As the corner workers weren’t visible the race would be delayed until the fog would lift. When it did lift, Michael Christensen didn’t…he dug-in and drove the treads off the wet tires he started on. After almost an hour of hard racing, having to fend off challenges from certain Ferraris and Porsches, he found the second step on race two.

With more points on the board, the team hustled to Lime Rock Park where we would string together two podium efforts — a second place finish and a convincing overall win. Both Michael Christensen and Spencer Pumpelly drove a controlled race while the team executed some of the best pit stops of the season. It sure felt good to hit that top step.

With Lime Rock Park over the team had a short break and headed back to Tampa while Michael travelled back to Europe to tackle the venerable 24 Hrs of Le Mans. This would be Michael’s second time driving the event (last year his RSR gave out during the night). This time Michael was honoured to be driving the “Pink Pig”. The Porsche marketing team had provided a special livery to pay homage to 70 years of the Porsche. Michael and his co-drivers drove a stellar race taking the checkered flag with a gap of almost 2:00 from the next car in class (also a Porsche). Michael only had a short time to celebrate as it would be time to head back to the USA and Road America – from Pick Pig to Green Machine. Racking up those air miles!

Road America for the Win

Fresh from his victory at Le Mans Michael keep the momentum going laying down blistering lap times securing a P1 result in the first free practice at Road America and ultimately achieving a P2 spot for qualifying. Unfortunately, the start of race two wasn’t exactly what we were looking for. At the green flag the push was on and the No. 24 car was boxed in at turn one. With contact being made by various competitors, Michael managed to keep the car clean at the expense of a few positions. We would fall back to P7 before clawing our way back to a P5 finish. Perhaps it was a bit of a reality check. Day two would bring redemption. This time we started out P3 however, Michael stayed so close to the P1 Bentley it was hard to tell where one car started and the other stopped. At the drop of the green flag, Michael stuck the No. 24 car to the rear end of that Bentley like you might when you find someone driving slow in the fast lane (We don’t endorse this on public roads…race tracks … well that’s different). While vehicles in his rearview mirror field found themselves off track or mowing that Road America turf, Michael stayed 100% focused on the back end of that Bentley. At turn three he made a beautiful move to pass the Bently on the inside to take P1 and never looked back.

A win for race two at Road America! Thanks to @alegramotorsports for a wonderful car this weekend. Feels good to take the top step in PWC. #Win #pwcra #porsche #motorsport 🍾🍾🏁🥇

Its been a great few races for us and an unreal month or Michael. We’re climbing the charts in PWC, and with three-race weekends in hand, we’ve got a good run towards the championship! Keep on pushing!

See the Start of Race Two