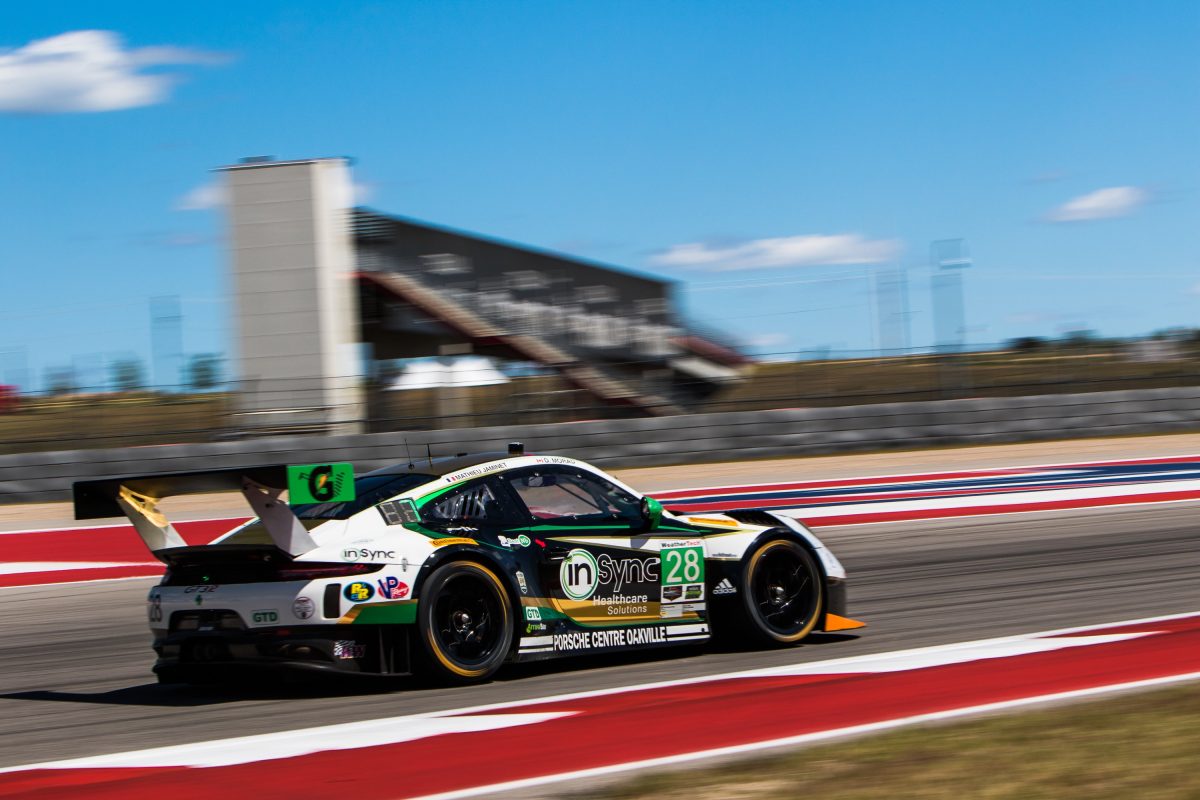 Doing it right at CoTA

The fourth race in the 2017 IMSA WeatherTech series is in the books for the team and it was full of emotional highs and lows. Let’s walk through them all.

We had our crew of usual suspects working the paddock and pits — always doing a bang-up job of dialling in the No. 28 car to perfection. On the driver side, Michael Christensen was a healthy scratch as he was across the pond taking care of business with the Porsche factory team in the World Endurance Championship (WEC) in Spa, Belgium. Tagging in for Michael was the French Connection, and a man with a name Michael de Quesada just can’t quite get right, Mathieu Jaminet.

Mathieu, a Porsche “Young Professional”, has a number of victories under his belt including two wins in the Super Cup at CoTA last year. All this to say he knows his way around the venerable track.

With the team assembled – the race weekend got off to a slow start. For the first few practice sessions the No. 28 car just wasn’t there. The lap times being turned in were off the pace and with such strong competition from the likes of the AMG Mercedes and Acura NSXs, the team would need to get to work — and they did.

Over the course of the next few practice sessions, the No. 28 car gradually improved. By the third practice session, the team was tearing up the track and turning in some seriously impressive lap times.

Qualifying day — speed is everything — The qualifying session would be 15 minutes long — and somewhere in those 15 minutes, Mathieu Jaminet would need to find the space to make it happen. Helping him find that space was the eye in the sky, Bob Dickman — the Alegra team spotter.

High in his perch atop the observation tower at CoTA, Bob radios in the positions of the other cars on the track — ensuring Mathieu can find the space he needs. “We needed to be in the top 45 – to have a fighting chance,” said Mathieu. Given the design of the track, yellow flags make rare appearances — so starting position is critical. The French Connection didn’t disappoint — Mathieu took pole position with authority – clocking a lap time of 2:06.531.

We were looking good.

With race day upon us, the team went through the usual rituals of preparing the car. The techs turned their critical eye to every detail making sure nothing was overlooked, while the drivers engaged in relaxing activities.

Right off the bat there was carnage. A few meters after turn one several competitors made contact. Mathieu managed to weave through the debris and set the pace. For the next 45 mins, the No. 28 car gradually pulled away creating a gap of almost 6 seconds from the next GTD Class car.

Daniel Morad took over driving duties as the pit crew executed a flawless stop. For the next 30 minutes, Daniel and the Alegra team managed to hold the lead. However, as the race continued, the completive set started to close the gap. There were a number of battles over the ensuing 40 minutes – but with tires loosing grip and the drivers having to work the car in blazing Austin heat, we started to loose position.

With 30 minutes remaining it was clear we needed a yellow flag for a chance to take a podium spot.

With only 10 minutes left contact between a GTD Mercedes Benz and a Prototype Challenge (PC) class car occurred causing the PC class car to catch fire and raising the yellow flag. Would this be the opportunity we were looking for?

The cars closed in behind the safety car. We had about 5 minutes left in the race – this was it — our tire temperatures had dropped and it was now or never. The green flag dropped once more and the field tore off into the Texas heat. True to the phrase painted on the back of Mathieu’s helmet “If in doubt, flat out” – Mathieu buried the accelerator into the floor pan of the GT3 R managing a lap time of 02:08.685 – the fastest lap of the race. However time had run out for Alegra – they crossed the refinish line in 7th place.

Looking back on the weekend — the team performed flawlessly. From testing to practice, to race day — execution was perfect. Pit stops and driver changes were flawless.

It’s difficult to pinpoint where things could have been improved — as Carlos said post-race “I’m one frustrated team owner”. So many things went right and the win evaded us. The team is looking forward to Detroit — we are on the right path and are still third in points – this isn’t over by a long shot.